Our tapestry of life

A magnificent tapestry capturing the history of the village was created to celebrate the 200th anniversary of Newcastleton which was built by the Duke of Buccleuch in 1793. Over 25 years on it is still as valued today as it was then and can be seen in the Liddesdale Heritage Centre, located in Newcastleton village.

The tableau is made up of 36 squares with a centre panel, each one depicting a different element of local history. Under the stewardship of former needlework teacher Jean Elliot, the ambitious project took two and a half years and the nimble fingers of 28 ladies and 1 gentleman to complete. Between them, over three-quarters of a million stitches were made to produce our village masterpiece!

The tapestry was revealed as part of our 200th anniversary celebrations receiving great acclaim by local people and visitors alike. It is on display as part of the permanent exhibition at the Liddesdale Heritage Centre where you can buy a copy of ‘Through the Eye of a Needle’ a book capturing all the squares and detailing our history.

To give you a little background, Newcastleton is a planned village built on 40 acres of land owned by the Duke of Buccleuch. 260 plots were available, and these plots were each let for 99 years. On 4th March 1793, building began on the right bank of the River Liddel, the site of three former holdings; Copshaw Ha’, Copshaw and Copshaw Park, hence the name still used today ‘Copshawholm’ or more familiarly ‘The Holm’.

Of course, the tapestry tells 36 different stories, but here are just two of the fascinating stories that are d 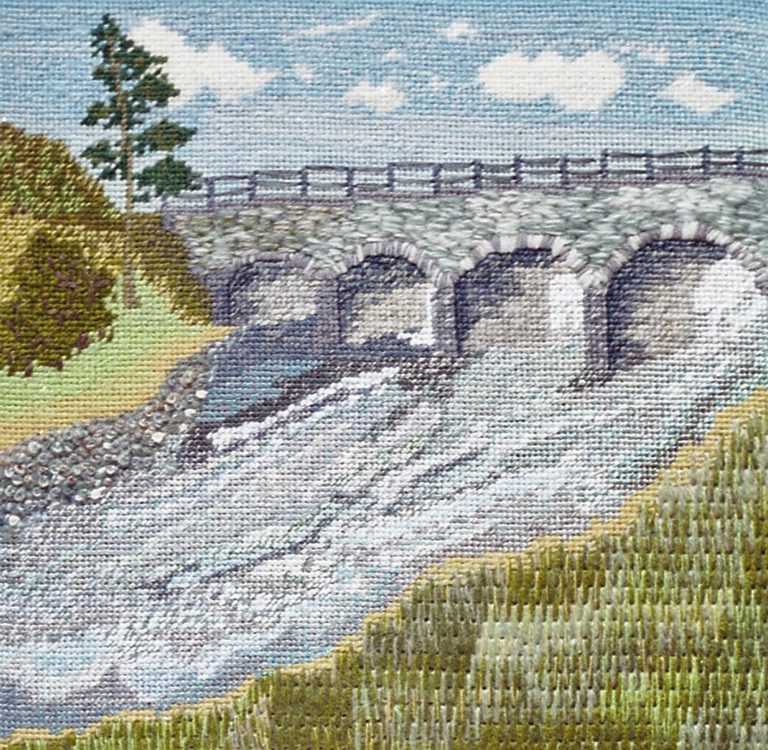 epicted in needlework on this stunning hand-crafted collaboration.

Cauld Poll Brig by Margaret Copeland
The Caul Pool Brig was built to carry the railway over the Liddel and as the name suggests there was a cauld there, it was a place much photographed.

For many years a favourite walk, down the path on the south side of the Holm Brig to the riverside to the Caul’ Pool Brig, cross the bridge, watching for trains of course before returning to the village via Mangerton and Tweeden. Flood damage has taken away all this land and the bridge was demolished in 1985/86, workmen discovered a very skilful and complicated method of construction finding it very difficult to demolish.

The Shoemakers by Ellen Wylie

The village had to be self-supporting because of lack of transport, we were fortunate in having many craftsmen from the beginning.

Some of the shoemakers were Sandy Armstrong, William Elliot, John Nichol, Jim Proudfoot, Elliot Turnbull, Jock Foster and Willie Little. More recently we had brothers John and Peter Robson, John made the left shoe and Peter the right, stitch for stitch they matched as though made by the same man. Made to measure and of the best leather, these boots and shoes were wonderfully comfortable and great value for money and were supplied to customers far and wide.