A personal experience by Cal Edge

#Be Active.  As someone with a natural predilection towards sitting still and eating cake, 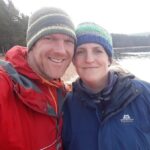 this recommendation wasn’t one I really relished getting on with, but do you know what? Being active actually DOES make you feel better, in so many ways. It really does! Here’s my story.

A few years ago, I knew that I needed to do something about my weight and general state of fitness, and so in a New Year’s frenzy of resolution, I made a commitment to take up running.

Prior to this moment of midnight madness I did no exercise at all, and I certainly never ran unless my perennial poor timekeeping absolutely demanded it – or unless my two year old decided to hop on his balance bike, open the back gate and do a premature school run to the other end of the village all by himself for no reason at all. In fact, it had probably been at least ten years since I did anything that could even be classed as active, runaway toddlers aside, and I was rather ashamed at just how much I of a couch potato I had become. I was terribly embarrassed about the idea of anyone seeing me attempt to exercise, so I chose an icy January morning to heave over my new leaf. I wrapped up in a bizarre assortment of loose-fitting, identity-concealing clothes – not being in possession of, or in favour of, activewear – and crept out of the front door into the freezing darkness like a hesitant but determined undercover agent. After procrastinating with a very long warm-up, I finally, reluctantly began to slap one foot heavily in front of the other, and run.

Now I’ll be honest, the benefits of getting active didn’t hit me very hard in those first few minutes of unsteady motion, thanks not only to the loud complaints of my body but also to the cold air (I am NOT a fan of being cold), the inability to see, the slippery pavement, and the ever-present fear of being recognised. I also realised very soon that I could barely run at all. After about 30 seconds I was gasping and aching and already regretting my hapless, foolish commitment. What had I been thinking?!

However, the encouraging tones of Laura, the voice on my Couch to 5k running guide – an app or podcast available for free from the NHS website – spurred me onI limped back home at the end of the session with a burning chest and aching muscles, but a welcome sense of triumph glowing within.  I had begun.

No one was more surprised than I was when I kept running in the ensuing weeks and then, eventually, years. My efforts were far from perfect. They were sporadic and stop-start and sometimes really rather pathetically half-hearted. I would have a good spurt, and then a holiday or a change in routine would make me conveniently forget about it all for months, and I’d have to start all over again. Sometimes I would just turn over in bed and put off running until tomorrow…all week long. Once I actually got out of bed, there was always a mental battle as I took off warm cosy pyjamas and put on cold unforgiving running leggings. At times I sat with one shoe on and had to force myself to put on the other instead of going back to bed. Sometimes I would rebel against the podcast and give up a run early, stomping home defiantly even as the ever-trusting Laura congratulated me for carrying on the run to the very end. But even these imperfect efforts made a difference. Eventually, I finished the Couch to 5k journey and felt incredibly pleased with myself. I was slow, I was breathless, but I could run 5k!

I never learned to like the cold, and in those early days I never once actually felt like getting out of bed before anyone else in my house, but overall I couldn’t deny that I definitely felt better when I was running regularly and I definitely felt worse when I wasn’t. 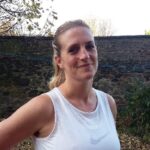 Obviously, it did my body good to move. A bit of cardio activity, a raised heart rate (however slight the raise) and a good dose of fresh air helped me lose a bit of weight, helped me become a bit more flexible, and made my legs a nicer shape if I say so myself. Vanity is surprisingly motivating.

But the mental benefits far outweighed the physical ones for me. Firstly and most significantly, there was the satisfaction of knowing I was doing something widely acknowledged as good. After so many years of looking on rather resentfully at other active people who exercised, I was at last one of them. Ahh, the moral high was significant!

Secondly, it gave me a disproportionate amount of enjoyment to know that I had followed through on my own goal. I actually did what I said I would do. And I kept on doing it.

I liked the way this achievement changed my view of myself. It engendered a new level of self-respect. It suggested to me a hundred other things that I could choose to do and follow through on, any number of other skills that I could work at bit by bit and actually see some real improvement in the long term. The world was my oyster!

After a year or two of regular running, I felt I’d earned the right to re-evaluate my fitness status, and the positive effect on my self-esteem was wonderful. I still love cake and sofas (preferably served together), but I am no longer a dyed-in-the-wool bonafide couch potato. I actually like running now, and I have stopped assuming that other forms of exercise automatically aren’t for me too. I now run at least 5K a week, most weeks, and if I leave it too long between runs, I actually start to miss it. Imagine that!

I miss the peace, the fresh air, the space. I miss being outdoors and seeing trees and sky and grass. I miss the occasional chat with a surprised sheep, cheerful communion with a passing squirrel, or even a breath-taking glimpse of an otter. I miss what happens internally as my body begins to move in a steady rhythm, and my soul breathes a sigh of relief because finally, away from the noise and the chaos of daily life, I can hear what it’s trying to say to me. Thoughts and feelings I didn’t know I had bubbled up and are heard and considered and processed. Running helps me tune in to myself, to mull things over productively instead of anxiously, and the opiates that are released after the physical activity definitely help to keep my spirits up and help me to feel happier and healthier overall. I invariably come home from a run more grateful to be alive, more aware of what I value most, and naturally, bright red and sweaty.

Even rocking the lobster look, I don’t feel embarrassed about being seen exercising any more, in fact, I quite enjoy the sense of solidarity as I nod and grin at passing runners, even if they go on to lap me several times as I plod along. I don’t even feel inadequate, for once. I’m doing it my way, at my pace, on my timescale, just for me, and it’s good. I wouldn’t have believed it a few years ago, but these days even I quite enjoy wearing exercise clothing. Something about pulling on stretchy, supportive active-wear makes me feel just a little bit Wonder Woman. Maybe that’s why superheroes always wear Lycra!

Knowing I am capable of moving quickly at-will helps me make more active choices in the rest of my day, too. Because I know I can, as an active person, I say yes more often to playing tag with my kids, I don’t baulk every time I’m pressed for a game of football, and when in hot pursuit of a runaway child on a bike, say, I can catch up before they have too much chance to taste the dangerous flavour of freedom. Sometimes, these days, I actually spurn using lifts and choose to take the stairs even when I need to ascend a full five floors to the top of a building. Stairs, after all, are nothing to me now.

I am a woman who runs.

Cal Edge lives in Edinburgh, having moved away from the Holm last October. She is a fulltime mum of three, and wife of one!  A freelance writer and designer of novelty cakes.  You may have seen her dressed in glitter, singing the part of Glinda in last years’ village production!